[Review: Walk On Earth A Stranger by Rae Carson] 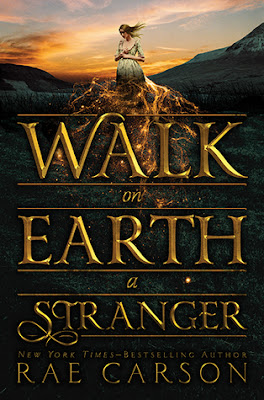 Gold is in my blood, in my breath, even in the flecks in my eyes.

Lee Westfall has a strong, loving family. She has a home she loves and a loyal steed. She has a best friend—who might want to be something more.

She also has a secret.

Leee can sense gold in the world around her. Veins deep in the earth. Small nuggets in a stream. Even gold dust caught underneath a fingernail. She has kept her family safe and able to buy provisions, even through the harshest winters. But what would someone do to control a girl with that kind of power? A person might muder for it.

When everything Lee holds dear is ripped away, she flees west to California—where gold has just been discovered. Perhaps this will be the one place a magical girl can be herself. If she survives the journey.

The acclaimed Rae Carson begins a sweeping new trilogy set in Gold Rush-era America, about a young woman with a powerful and dangerous gift.

My Thoughts:
An Open Letter To Walk On Earth A Stranger,
Hmmmmmmm? You and I didn’t connect, which is a real bummer. You’re good, don’t get me wrong, but there was a divide between us that I just couldn’t cross. Your story was awesome. I liked your characters. The flow was good. But still I couldn’t get into you until the last 20% or so. I’m going to have to finish the rest of your series, cause now I’m hooked, so hopefully I’ll gel with those stories a bit better.
-The White Unicorn
I can’t believe that I’m not singing the praises of this book. I should be, as I’m a HUGE fan of Carson’s Fire and Thorns series, so it would only seem natural. But for some reason I didn’t gel with this book, and that makes me sad.
Carson is a fantastic world builder, but I felt like that was lacking in Walk on Earth a Stranger. There were moments when I was sucked into Lee’s story, and other times where I felt like I was an outsider looking in. The world felt sparse. Maybe it was because this book is based on actual events, and things that really happened when people made their way out to California during the gold rush? Maybe it was just my connection to the story? It could have also been the fact that I thought the book’s pacing felt rushed, and slow all at once. There was a lot of hurry up and wait happening.
That being said, I adored the characters that Carson used in her story. Lee (Leah) is wonderful. She’s conflicted, strong, brave, intelligent, and cursed. I liked that she hid out as a boy, and in doing so learned so much about herself. I also dug the fact that she can witch for gold the way some people can witch for water. It adds a magical element to the story that was a fun addition.
Carson also didn’t avoid addressing a lot of social issues in this book. It was refreshing to see so many strong women and men come together. The book addresses things like human rites, the woman’s place in the home, prejudice, and a slew of other things. It makes for some character driven reading, I just wish that the rest of the plot went as smooth as the characters.
That being said the plot was actually quite genius. I liked it a lot, even though I didn’t connect with the execution of it. Carson knows how to throw curve balls at her readers, and that was still evident in this book.
So, in the end, this book is good, even if I’m not as excited about it as I’d like it be. If you dig the gold rush, magical powers, slow burn romances, and a lot of social issues being tackled in one book, read this!