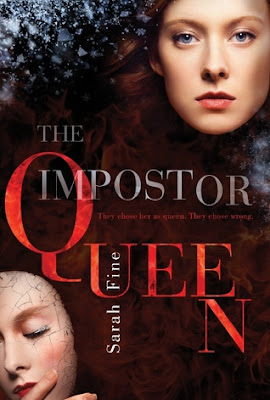 Sixteen-year-old Elli was a small child when the Elders of Kupari chose her to succeed the Valtia, the queen who wields infinitely powerful ice and fire magic. Since then, Elli has lived in the temple, surrounded by luxury and tutored by magical priests, as she prepares for the day when the Valtia perishes and the magic finds a new home in her. Elli is destined to be the most powerful Valtia to ever rule.

But when the queen dies defending the kingdom from invading warriors, the magic doesn’t enter Elli. It’s nowhere to be found.

Disgraced, Elli flees to the outlands, the home of banished criminals—some who would love to see the temple burn with all its priests inside. As she finds her footing in this new world, Elli uncovers devastating new information about the Kupari magic, those who wield it, and the prophecy that foretold her destiny. Torn between the love she has for her people and her growing loyalty to the banished, Elli struggles to understand the true role she was meant to play. But as war looms, she must align with the right side—before the kingdom and its magic are completely destroyed.

-Goodreads
———————————————————————————————————————————
My Thoughts:
Okay, I have to be honest here. The first 6% of this novel is brutally slow. I almost didn’t feel like I was reading a Sarah Fine novel. I was so confused about what was going on (not story wise, but pacing wise) because Fine is the queen of pulling you right into her stories, but there was a disconnect in the beginning for me. That being said, soon I was pulled into a story that just never quit, and then the slow beginning made perfect sense. I guess what I’m saying is, don’t mind the slow start, because Fine has knocked another book out of the park, and it’ll leave your heart pounding.
This is Fine’s first dive into full on fantasy and I have to say that she nails it. She’s built a world that is both beautiful and terrifying. She paints the city with blood, and tells a story of a girl who isn’t what she planned on becoming. I love the fact that Fine messed with the idea of “what happens when you’re not who anyone else thinks you are.” It effects Ellie in ways that you can only imagine. It’s a different angle than I’ve been seeing lately, and Ellie is a very different lead then I’m used to seeing Fine create.
Ellie herself is so soft. But she’s also someone that you have to look out for. The girl doesn’t give up, so even though she might seem weak, she’s powerful in the fact that she’s not afraid to do what needs doing. I really liked her. I think she’s what so many of us can be, and she’s a massively relatable. I think everyone will see bits of themselves in her character.
Fine is also well known for her ability to round out her casts with wonderful secondary characters, and she doesn’t disappoint there. Even characters that only have a few pages of book time make you notice them. They’re used correctly. Every single time.
There is a bit of a love story, but it doesn’t over shadow what’s going on with the story. Plus, Oskar is a total winner, and he knows how to provide for his family.
Some of my favorite parts of this story were the bits about the magical temple that Ellie leaves behind in the beginning of the story. Fine layers gory details into the novel, and I’m hoping that we get a lot more of that in the next novel. I want to know about the creepy inner workings of this magical realm.
I suggest that everyone read this novel, and everything that Fine has ever written!