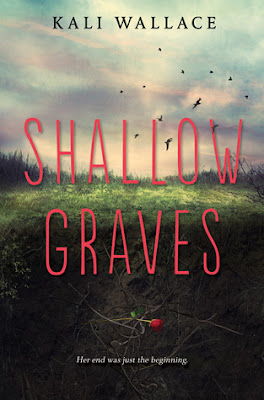 For fans of Holly Black and Nova Ren Suma, a gripping, hauntingly atmospheric novel about murder, revenge, and a world where monsters—human and otherwise—lurk at the fringes.

When seventeen-year-old Breezy Lin wakes up in a shallow grave one year after her death, she doesn’t remember who killed her or why. All she knows is that she’s somehow conscious—and not only that, she’s able to sense who around her is hiding a murderous past. In life, Breezy was always drawn to the elegance of the universe and the mystery of the stars. Now she must set out to find answers and discover what is to become of her in the gritty, dangerous world to which she now belongs—where killers hide in plain sight and a sinister cult is hunting for strange creatures like her. What she finds is at once empowering, redemptive, and dangerous.

-Goodreads
———————————————————————————————————————————
My Thoughts:
Shallow Graves is such an interesting novel, and it’s certainly going to put Kali Wallace on a lot of people’s radars. This book is dark, like really really dark. It asks a lot of interesting questions, and it’ll give you goosebumps to boot. It’s a novel told from the POV of monsters, but it begs the question as to if they’re actually evil or not.  It felt like the story could have been an episode of Supernatural, just told from the monster’s POV.
I loved Breezy’s character. She’s an interesting one in the fact that she knows who she was, but has no idea who she is once she wakes up. Wallace makes sure to give us enough flashbacks in the story that we get to know Breezy as she was, and as she is now. She goes from a carefree high schooler to a dead girl walking, and the changes she goes through to be okay with herself are extreme. Wallace uses Breezy to ask the question “what does it mean to be human” over and over again.
I have to admit that while I enjoyed the plot, and all the characters in the novel, it was Wallace’s writing choices that made the book so strong for me. From when she decided to tell us who the killer was, to the fact that there isn’t a drop of romance, to the fact that it’s really just about characters struggling with the oddities they’ve been dealt in life. I have to say that these are the things that made Shallow Grave stand out for me.
There are so many more things that I’d like to talk about, but I feel that the way the book is written limits me to what I can say about it. If I let anything slip, I feel like people won’t have the same reading experience that I did, and that would be a total shame.
Read this novel if you enjoy twisted moral questions, lots of gore, and compelling characters.