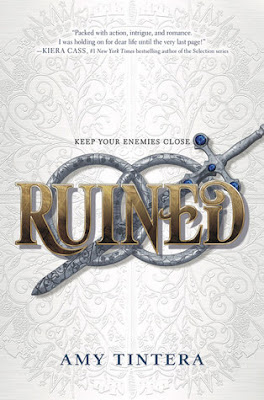 Emelina Flores has nothing. Her home in Ruina has been ravaged by war. She lacks the powers of her fellow Ruined. Worst of all, she witnessed her parents’ brutal murders and watched helplessly as her sister, Olivia, was kidnapped.

But because Em has nothing, she has nothing to lose. Driven by a blind desire for revenge, Em sets off on a dangerous journey to the enemy kingdom of Lera. Somewhere within Lera’s borders, Em hopes to find Olivia. But in order to find her, Em must infiltrate the royal family.

In a brilliant, elaborate plan of deception and murder, Em marries Prince Casimir, next in line to take Lera’s throne. If anyone in Lera discovers Em is not Casimir’s true betrothed, Em will be executed on the spot. But it’s the only way to salvage Em’s kingdom and what is left of her family.

Em is determined to succeed, but the closer she gets to the prince, the more she questions her mission. Em’s rage-filled heart begins to soften. But with her life—and her family—on the line, love could be Em’s deadliest mistake.

-Goodreads
——————————————————————————————————————————–
My Thoughts:
We have new Amy Tintera guys! When I heard that Tintera was stepping into fantasy, I got really excited. I adored her zombie novels Reboot and Rebel, and I’ve been needing a fix of Tintera’s writing. And boy did she deliver.
Ruined is a fast paced adventure that doesn’t play by all the normal fantasy tropes. I found myself being pulled into the story immediately, and it didn’t take long for me to fall in love with the world and the characters that filled the pages. I’m actually really bummed that I’m going to have to wait for the rest of series. Which is really really good thing.
One thing that I’ve always loved about Tintera’s writing is her ability to write fantastic underdog stories, and Ruined is no different. Em is a girl without magic who’s had to overcome so much, though she doesn’t make it seem that way. She’s had to use the skills and assets that she’s been given to make her as strong as the people filled with magic around her. In fact it makes her seem like she has a lot more going for her than anyone else in the story. I found myself instantly pulled into the tale because of Em’s strong voice. She’s someone anyone can cheer for.
Cas is also a bit of an underdog in his own rite. He may be a prince, but he’s not the prince anyone wants him to be. It makes him interesting. It makes him more than eye-candy. And its makes the story between Cas and Em so much more touching, annoying, and beautiful. It will make you feel all those things, and possibly in that order.
Tintera also doesn’t shy away from making her characters fierce. Body count, blood spillage, and gore are not things that she shies away from. It gives this story so much life. Conflicted characters who make tough calls are my favorite, and this book is full of them.
If you’re looking for a fantasy novel that’s full of great characters, great world building, and tons of conflict (without being too much drama), this book is perfect.