[Review: Revenge And The Wild by Michelle Modesto] 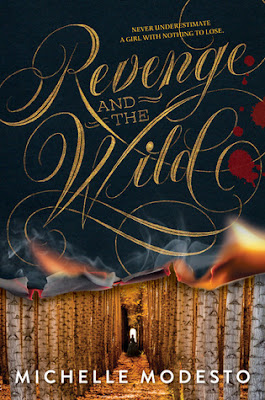 The two-bit town of Rogue City is a lawless place, full of dark magic and saloon brawls, monsters and six-shooters. But it’s perfect for seventeen-year-old Westie, the notorious adopted daughter of local inventor Nigel Butler.

Westie was only a child when she lost her arm and her family to cannibals on the wagon trail. Nine years later, Westie may seem fearsome with her foul-mouthed tough exterior and the powerful mechanical arm built for her by Nigel, but the memory of her past still haunts her. She’s determined to make the killers pay for their crimes—and there’s nothing to stop her except her own reckless ways.

But Westie’s search ceases when a wealthy family comes to town looking to invest in Nigel’s latest invention, a machine that can harvest magic from gold—which Rogue City desperately needs as the magic wards that surround the city start to fail. There’s only one problem: the investors look exactly like the family who murdered Westie’s kin. With the help of Nigel’s handsome but scarred young assistant, Alistair, Westie sets out to prove their guilt. But if she’s not careful, her desire for revenge could cost her the family she has now.

This thrilling novel is a remarkable tale of danger and discovery, from debut author Michelle Modesto.

-Goodreads
———————————————————————————————————————————
My Thoughts:
Here it is, my first five unicorn read of the year! This book is so good. It’s a standalone, it’s kind of historical, it’s full of fantasy, and it’s got one of those heroines that will not soon be forgotten. This book is something really strange and wonderful.
Clearly I’m already a Mosesto fan, and this is her first book, so I’d say we’re off to a good start. Her world building is spectacular. She gives us this setting that is full of historical detail, but is drenched in a fantasy world. She mixes turn of the century California history with vampires, trolls, magic, and a whole slew of other creatures. It makes the book a little kitchy, but the subject matter is really heavy, so there is a balance that’s really nice.
Westie is everything you want from a main character. She’s so herself that you never doubt her intentions, or her person. She’s in your face, has a foul mouth, and ends up in all sorts of situations, but in the end she’s super lovable, and would do anything for her family. Basically, I really liked getting to know her, and would have totally been fine with this being more than one book, and that doesn’t happen very often.
The rest of the characters are also amazing, and really well crafted. None of them go to waste, and it’s fun to see such evenly matched villains and heroes in one novel. Everyone had their part to play, and they all played it well. Even the characters who had bit parts were vital to the novel, and that’s saying something.
I also loved that Modesto wasn’t afraid to write such a gory story. When you add cannibals to a story it sometimes falls flat, and I can say that that isn’t the case for Revenge and the Wild. Modesto makes sure that these flesh eating people are to be feared, and so they are.
I must admit that while some of the novel was a tad predictable, most of it was really surprising and fantastic plotted. You might think you have things figured out, but then Modesto hits you with something you didn’t even know you should be looking for.
Everyone, read this book! It’s like a toned down episode of Penny Dreadful, and what’s not to love about that.