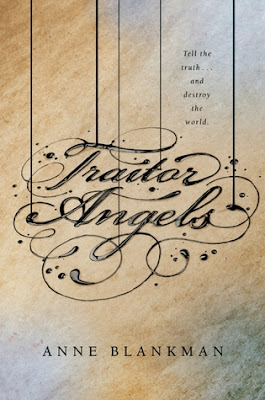 Six years have passed since England’s King Charles II returned from exile to reclaim the throne, ushering in a new era of stability for his subjects.

Except for Elizabeth Milton. The daughter of notorious poet John Milton, Elizabeth has never known her place in this shifting world—except by her father’s side. By day she helps transcribe his latest masterpiece, the epic poem Paradise Lost, and by night she learns languages and sword fighting. Although she does not dare object, she suspects that he’s training her for a mission whose purpose she cannot fathom.

Until one night the reason becomes clear: the king’s man arrive at her family’s country home to arrest her father. Determined to save him, Elizabeth follows his one cryptic clue and journeys to Oxford, accompanied by her father’s mysterious young houseguest, Antonio Vivani, a darkly handsome Italian scientist who surprises her at every turn. Funny, brilliant, and passionate, Antonio seems just as determined to protect her father as she is—but can she trust him with her heart?

When the two discover that Milton has planted an explosive secret in the half-finished Paradise Lost—a secret the king and his aristocratic supporters are desperate to conceal—Elizabeth is faced with a devastating choice: cling to the shelter of her old life or risk cracking the code, unleashing a secret that could save her father…and tear apart the very fabric of society.

-Goodreads
——————————————————————————————————————————–
My Thoughts:
This isn’t my first time reading something from Anne Blankman. She’s actually one of my favorite historical writers. Without a doubt it’s because she mixes actual people from history, and made up characters into a story together. She uses her fictional characters to give you an understanding of actual historical figures, and Traitor Angels doesn’t disappoint on that front.
Almost all of us have heard of the poem Paradise Lost, and we know that Milton wrote it. Blankman takes that knowledge and throws us into a world of mystery and excitement, one that clearly didn’t happen the way she’s written it. But also one that’s so wrapped up in historical fact and people from history that it feels like it could have.
She give us a protagonist in the form of Elizabeth Milton. Elizabeth was not an actual person, but the rest of the Milton family is as historically accurate as Blankman could make them. I liked that John made sure that Elizabeth could take care of herself. While other girls are learning how to keep a home, Elizabeth is taught the art of sword fighting, reading/speaking/writing mutable languages, and the art of his poetry. All of these things come into play in the novel, and nothing that Blankman writes goes to waste.
The book not only plays with the idea of poetry, but also delves into the impact of religion. These are the two biggest things that drive the plot of the novel. Art, exploration, studying the skies, power, and more are also key elements.
I enjoyed this one a lot, but as I don’t love the time period that it was set in, I found that it read a bit slow, but I know that it was just me. It’s also got extremely exciting near the end, as Blankman made sure to throw in a few more historical events. That being said I still enjoyed this novel a lot. It’s a mystery novel at its heart, and what’s better then that.